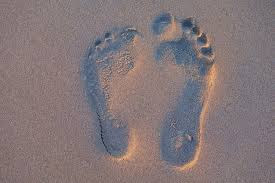 
The concept of shoe fit is largely a subjective one and size alone, is not the only determining factor. Research from the Battelle Memorial Institute has shown there are at least 38 individual factors influencing or involved in shoe fit. Many of the 38 factors were subjective involving the opinion and attitudes of consumer and fitter alike. In the end it was the customer who determined whether the shoe fitted or not. Asymmetry and anatomical variation mean many people are challenged when seeking an ideal fit. 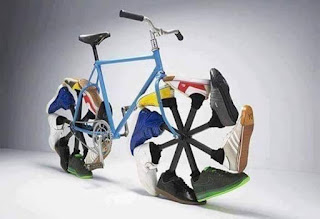 
Both style and pattern of a shoe bear influence on sizing and fit is determined by the distribution of foot mass within the shoe. Heel height and toe spring are critical for functionality. Shoe types such as fashion footwear and work boots may be fitted with a bit more volume allowance than the slightly snugger fit of an elegant fashion or dress shoe. The type of shoe construction can bare an influence. e.g. welts, cements, slip lasted, stitchdown, injection-moulded etc, will show slight differences in fit on the foot. Some manufacturers or brands apply their own particular specifications of dimensions on their lasts e.g. backpart, forepart, tread, etc. and this makes a difference in fit among different brands on a given size. The foot fitted in the morning will be smaller than the foot fitted in the afternoon. Toe shape of the shoe may influence the fit and shoes with narrower toes may need to be worn a half size longer (when available). 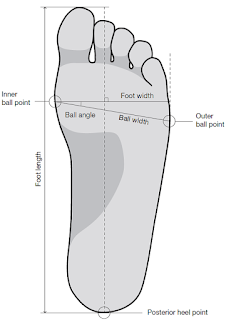 
The length of the foot is the most commonly used measurement but so too is the width of the ball when fitting shoes. Measurements for the last are more complicated with additional data such heel width, heel to ball length, waist and instep girth necessary to the fit of the shoe. There are several shoe size systems used throughout the world but the four major systems are United Kingdom, American, Continental (or Paris Point) and Japanese. Attempts have been made to introduce an international shoe size system called the Mondo Point but to date this has not been successful

UK Shoe Size System
The first description of a shoe sizing system was made and recorded by British genealogist, Randle Holme III (1627–1700)in the Academy of Armory and Blazon in 1688. 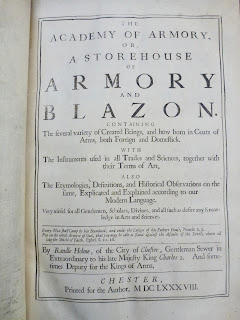 ( Academy of Armory and Blazon Image via RCT)


The UK System starts from zero, at 102 mm with 8.4mm (1/4 ") between whole sizes (4.2mm between half sizes). Adults sizes range from size 1 to size 15 (equivalent to 12"). The UK Shoe Size System for children is divided into 13 parts. Sizes start at five inches long and every fourth part of an inch thereafter until, size 12. Size 13 or short 13 and consists of length of 8 inches and a quarter. This also starts the Adult size 1. 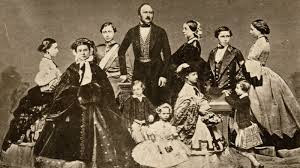 
Until the time of Queen Victoria, children's shoes were made as miniature adult shoes, with no special feature for growing feet. The children of the Middle Class in Victorian times wore shoe styles more akin to fancy dress which may account for why the design of today's shoes contain motifs which refer to previous ages and classic periods of history. Going barefoot is still within living memory and many children went without footwear as a normal practice and not through poverty. Work shoes were often handed down with the better off wearing them before passing them to siblings. 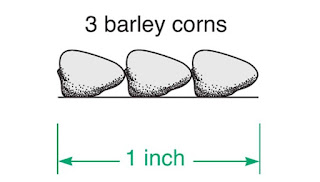 It is not clear why a unit of 13 was used to judge a critical point between child sizes and adults. The origins of this remain clouded but there are several theories. It is understood early English shoemakers started with the smallest size (0 or 1) at four inches. Four inches was an easy measure to record because it was the width across the knuckles which happened to correspond to the size of a child’s foot need their first pair of shoes. By coincidence 4.22 " measured 13 barleycorns. The next easy measure was the span of the hand or 9". Measure across the knuckles (4") plus the span of the hand (9") gave 13". This measured the average length of a child's foot at puberty. Adult sizes would logically start at the end of the child's size. Another belief is based on a foot measuring practice at the time. Some historians believe shoemakers accepted 13 as the base unit for measuring feet. The shoemaker's size stick was twelve inches long with the units measured from zero. This meant twelve became thirteen. There have been several attempts to standardise measurements of shoes and adopt the quarter inch unit, however arguments have always failed due to costs and problems of changing to a new system. As early as the seventeenth century a "guild of shoemakers" had agreed on a common size scale based on a quarter inch rather than the third of inch. However little had changed by the nineteenth century and a shoe sizing system based on one-third inch, scale was still preferred. The barleycorn, for all its metrological shortcomings, continues to be used in both American and English sizing systems.

The first shoe sizing system with detailed proportional measurements for lasts and shoes came from North America. The instigator, Edwin B Simpson of New York, prepared the first chart of standardised last measurements in 1880. This included shoe widths but it was another seven years before the Retail Boot and Shoe Dealer's National Association adopted the system. 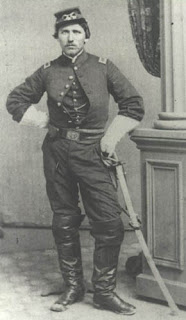 
Much of the impetus to introduce a size system had arisen during the American Civil War (1861-65) where mass produced shoes were made in left and rights for the first time. As the main shoe manufacturers were in the North then orders for soldiers required a size system. To make it easier for the Army to order shoes for their servicemen, each soldier was allocated a shoe size as well as a name tag. Despite the availability of in flare footwear, these were not comfortable and many complained. Manu of the Confederate infantry fought barefoot. Right and left shoes were not commercially available for another half century. Although North America legalised the use of the metric system the industry did not adopt it as the only means. Regular reviews of regulation have meet similar non-compliance. Consequently there remains little standardisation of shoe sizes within the US. Ironically the industry continues to use Imperial measurements and each manufacturer determines how large a certain size will be. The only standardisation is each full size is 1/3 of an inch longer than the previous size. Women's shoes are marked 1 1/2 sizes different than men's (a size 9 women's shoe is equal in length to a size 7 1/2 men's shoe). In the American (or Standard) System the first number in the code represents the width (1 = A, 2 = B). The second number followed by a zero denotes the whole size: when the second number is followed by a 5 it indicates a half size. 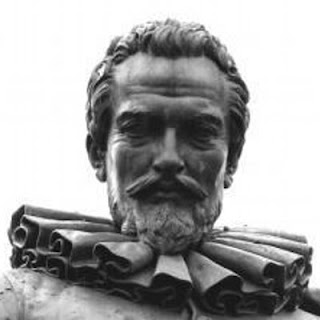 
The Europeans use a metric system and hence each full size (or two thirds of a centimetre) is less than a full size but more than the half size. North America is one of the few countries, which is still using imperial measurement whereas most other countries have adopted a metric system. Gabriel Mouton, a French abbot, first introduced the metric system in 1670. In 1801 after several modifications the French officially adopted the measurement system. The French system does not support half sizes. Infant sizes start at size 15 (equivalent to 0) and each size then progresses by two thirds of a centimetre. By 1875 several nations had got together to discuss adoption of the Paris Point System and whilst countries like North America legalised the use of the metric system, the industry refused to adopt it as the only means. 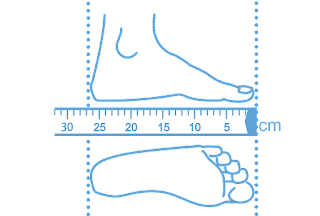 The Japanese system is based on the length of the foot in cm.

Mondo Point
This was a proposed international shoe sizing system for last and shoe based on the metric system and incorporated a girth measurement. The idea was thought to have originated in Australia and was adopted by the British Shoe and Allied Trades Research Association (SATRA) with the intension of replacing the English, French, Italian and other size systems. 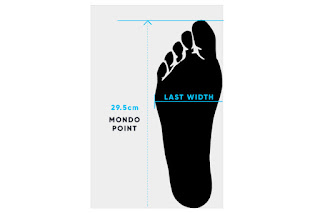 
Mondo Point provided a uniform system of shoe sizes among the nations of the world. The sizes were based on millimetres. Shoes were described as 255/98 or 255 millimetres long and 98 millimetres broad. Sizes progressed from the smallest to the largest, from children's through to adults without interruption. Foot size was determined with the person weight bearing. Although adopted by several countries the Mondo Point shoe size system has fallen into abeyance principally because it was not accepted by the US manufacturers. However it is still used in sizing ski and snowboard boots. 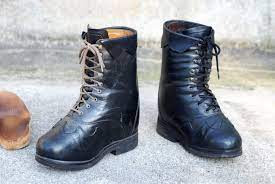