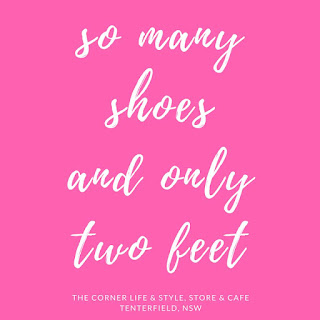 Posted by footalk at 1:40 AM No comments:

Instant shoes: Things can only get more automated 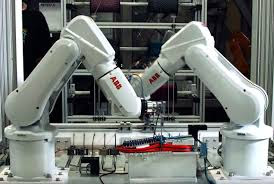 Historically mass production of footwear has always been labor intensive and less than environmentally friendly . Automated technology may help and whilst the technology is not quite advanced enough yet to be fully automated,early signs are it is getting there. The use of robotics in shoe manufacture is beginning to shape the footwear industry’s growth by pushing boundaries, like same day manufacture and production. The Keen Uneekbot is a miniature manufacturing marvel that assembles shoes in six minutes. Colours can be selected from menus.

In 2005, Keen Footwear introduced the Uneek sandal. The entire shoe was held together by a single cord that was weaven through both the sole and a lightweight upper. 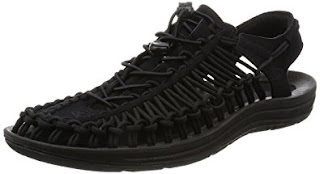 The next stage was to develop a robot capable of building custom versions of the sandal, anytime or anywhere. In conjunction with automation specialists, the House of Design , they came up with “the world’s smallest shoe factory.” The system consists of two robotic arms, several custom fixtures, and a tablet which serves as the robot’s controller, allowing users to start and stop the shoe-making process or input important variables. 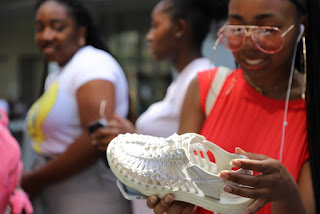 When activated, the two arms work together to create a custom pair of Uneek sandals, automatically selecting the proper coloured cord before seamlessly weaving it through the shoe’s other components. In fact, on its fastest setting, the robot completes its task in just six minutes, which is roughly half the time it takes someone to accomplish the same work by hand. The shoe is then handed off to an actual human, who checks the Uneekbot’s work for quality control and finishes the last few steps of its construction. The sole needs to be finished by hand. and bungee material is used to thread through the shoe loops. Bungee material is used to make it tight, and then more is added to extend room around the insole so the foot can fit. 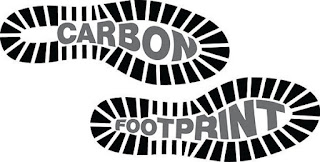 Designers were determined to reduce the carbon footprint in shoe manufacture and the Uneekbot accomplishes this in no short measure by eliminating excess waste and dramatically reducing the time required to create a single shoe. Making shoes there and then also eliminates fossil fuel emissions (and costs) associated with shipping footwear to the consumer. 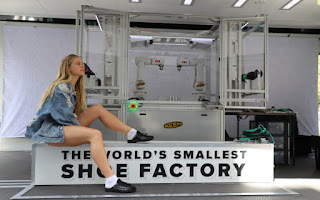 Currently to promote and educate budding designers on innovation and creativity, the little robot is on a North American tour.
Posted by footalk at 11:35 PM 2 comments:

Labels: Instant shoes: Things can only get more automated 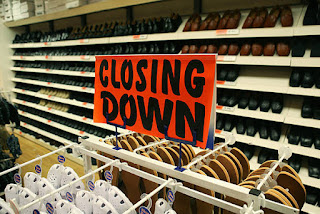 One reason for the recent increase in presence of ath-lesure footwear in CBDs is the relaxation of office dress codes including the rise of casual Friday or dress down days at the office. An increasing number of companies now invite their employees to participate and wear casual attire including sneakers to work. This 'casualization of fashion footwear,' has come as a bonus to the sneaker manufacturers whilst more traditional shoe manufacturers continue to struggle in the high street. 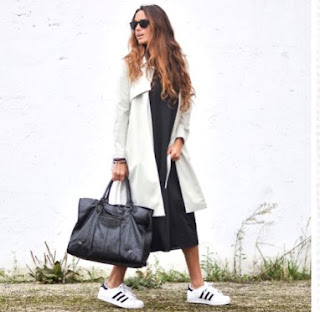 Fashion crossover from sport to high street takes many forms but in the case of trainers it started with industrial action in the transport industry in North American cities. Thousands of commuters were sent scrambling to their closets for comfortable shoes to walk to work. The aerobic craze of the 70s and the jogging and running boommeant the humble canvas topped shoes had gone through a fashion facelift and designer trainers were seen everywhere from streets, playing fields, gymnasia to catwalks. A hybrid shoe design soon emerged , this was called the cross trainer. The generic sports shoe incorporated the good fitting features along with the ideal of a shoe designed for recreational physical activity. New polymer materials allowed the combination of lightweight strong uppers with well supported and robust outsoles. 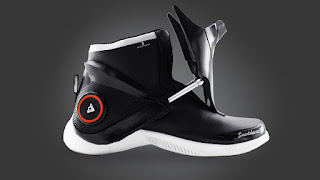 The new generation of trainers are smartshoes, trainers with an electronic edge. These typically feature a Bluetooth-connected accessory (usually insoles) that link activity or location to a smartphone app. Typically these count daily steps and calculate calorie intake, sort of thing. However, there is no end to the smart-shoe possibilities: from ordering dinner and displaying works of art to evading spills and biodegrading. Nothing says innovation like high-tops that order pizza and pause live TV. Presently the smart shoe market is dominated by big names (Nike, Under Armour, and adidas) although some relative unknowns (Salted Venture, Daphne, 361) are making their presence felt too.