How heels started as a men's shoe

Ten (10) Shoe Books All Footwear Fanatics Need to Own 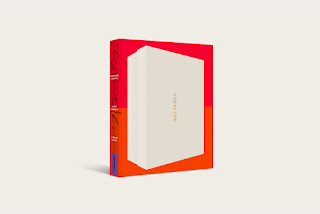 10 Shoe Books All Footwear Fanatics Need to Own Footwear News
Posted by footalk at 5:46 PM No comments:

These Glitter Heels are Edible

Shoes transform from flats to high heels in seconds.

Are shoes with swappable heels the future? Kitty Knowles, The Memo. 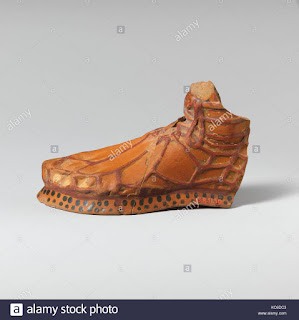 Miniature terracotta shoes were used as funerary vases in Persia 2000 BC and from Greek times jars or aryballos made in the shape of shoes or boots were used to store oils, ointments or perfumes. 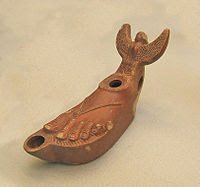 The prehistoric northern tribes which inhabited the Italian peninsula and eventually became the Romans kept jars and amulets in the form of shoes. The Romans considered models of the foot good luck charms which would ward off evil spirits as well as encourage fertility. Oil lamps in the shape of feet wearing sandals were used as night ;ights by the Romans 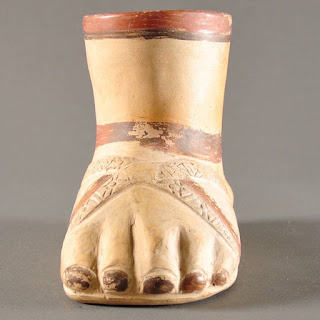 Between the 8-12th century, the Incas used vases in the shape of model feet and were called the third foot. These might store powers of chica and cola which were used as burial offerings. 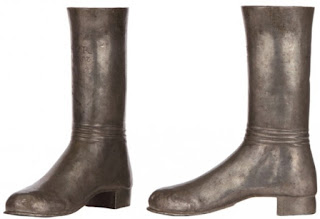 In 15th century Europe, long toed boot shaped drinking cups became popular. Many believe these vessels were first used as ceremonial goblets used to welcome new members or bestow special cheer to mastership of the Cordwainer's Guild. Loving cups from the same time were more often modeled on women's shoes, some with inscriptions like, "I wish for no other." 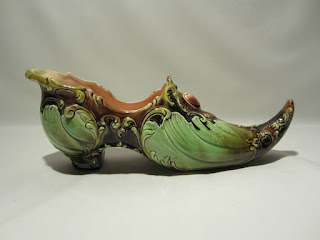 Throughout the 16th and 17th centuries the workshops of Faenza and Florence made delightful majolica versions of delicate shoe styles of the time. These were tin-glazed earthenware richly coloured and decorated. Men used these artifacts as hand warmers or containers for spirits. Many were made with a neck for straws and these were thought to be popular wedding presents so the couple could enjoy a honeymoon toast. During the 18th century it became very popular for adults to exchange gifts of porcelain shoes. Known as 'fancies in faience' these were miniature shoes filled with sugar almonds or jewelery like rings, brooches and even shoe buckles. The term faience was derived from Faenza in Italy. The shoes were meant for luck and their contents underpinned friendship. The fashion for faience grew throughout the 18th century and porcelain makers like Delftware catered accordingly. Delft was based in the Netherlands and produced distinctive style of glazed earthenware (usually blue and white). The company produced wonderful miniatures much admired because of their painted designs, often including people in everyday events. 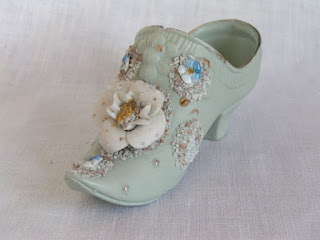 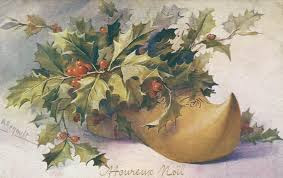 Traditionally French and Spanish children left their clogs filled with carrots and hay for the reindeer and Santa reciprocated by filling their shoes full of confectionery. This is known as Sabots de Noel. If you are ever in France during the festive season you may be surprised to find children lay out their shoes and not their stockings for Père Noël (Father Christmas}. 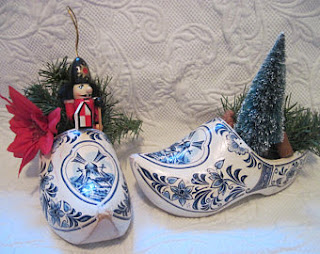 The origins of Sabots de Noel, are according to tradition on Christmas Eve, a little French girl put her sabots in front of the fire, hoping Père Noël would leave her something. When she woke up on Christmas morning she could not find her wooden clogs but instead, where the clogs were, she found a pair of clay fired, shoes, filled with confectionery. Her grandmother explained the strange transformation. when Père Noël was chilled to the marrow he was forced to light a fire to keep himself warm. When he ran out of firewood he used the little girl's clogs to feed the fire. By means of thanks and so as not disappoint the child, Père Noël ventured outside into the cold to find some clay. With incredible skill he forged a pair of porcelain shoes and left them, filled with nuts, apples and spiced buns. 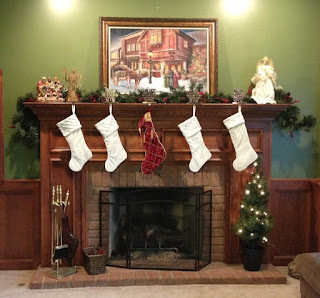 It was only in the English version of Saint Nicholas did he throw golden coins down the chimney which were caught in the children’s' stockings, hanging up to dry by the fire.

Reference
Weber P 1982 Shoes : a pictorial commentary on the history of the shoe Switzerland: The Bally Shoe Museum