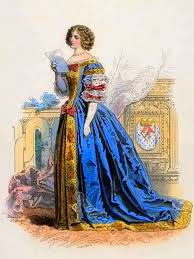 By the end of the Middle Ages clothes had became important symbols of social status. They supplied a kind of social ritual, acknowledgement of which indicated breeding. France was the capital of fashion and the concept of the sartorial ideal beauty was depicted in art and literature. In Italy much greater attention was paid to the perfection of the female body. 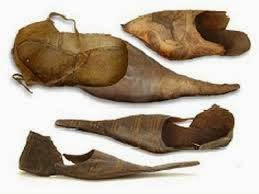 Sometime during the 16th century, after the gothic period, there was a European movement which celebrated the Virgin Mary, known as the Cult of the Virgin Mary. Fashion lines changed from sharp peaks to more rounded and softer lines. The shoe fashion for poulaines (long sharp toed shoes) for men was replaced with Duck's Bills. These shoes were broad enough across the foot to accommodate each toe individually and the uppers were made from softest of leather. 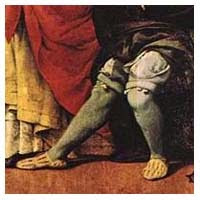 As the fashion spread the breadth got wider and wider until the shoes measured 24’ across the forefoot. Like contemporary sleeves and leggings, shoe uppers were slashed with fine razor cuts to reveal glimpses of fine brightly coloured tights which were worn beneath. Courtiers had soft fur stitched to the side of the slashed leather to give the outward impression of pubic hair. Costume historians believe the fine slashing of clothing was a deliberate attempt to emulate the vagina opening and closing. The common belief is this fashion was originated by followers of the Cult of the Virgin Mary and was an outward celebration of the female form. The style lasted for just under a century until it was stopped by (Bloody) Queen Mary I (1516-1558) who issued sumptuary laws in England to restrict the breadth of a shoe. 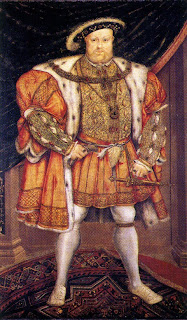 The duck’s bill shoe was a style preferred by her father, Henry VIII who broke away from the Catholic Church to marry his second wife and divorce Mary’s mother. Mary subsequently wanted to marry a catholic and encouraged by Rome (keen to destroy the Cult of the Virgin Mary) she legislated against the Bears Paw as she returned England to Catholicism. Around about the same time the first recorded attempt to outlaw publication about sex was introduced. (Obscenity Bill, 1581). 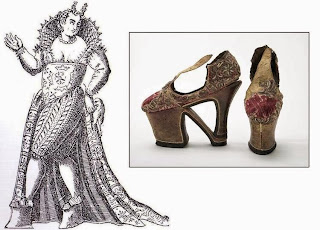 In the affluent city states of sixteenth century Florence and Venice the ladies became infatuated with the exotic bath shoes of the Middle East as well as the Moorish influenced elevated footwear of Spain. The fashion fusion brought into existence the chopine or original platform shoe. Styles for higher and higher platforms up to 24 inches from the ground made walking unaided impossible and so many falls were reported and miscarriages recorded in women wearing chopines, laws were passed to ban them. To attract clients sex workers of the time took to wearing platforms in the street long after they were fashionable. 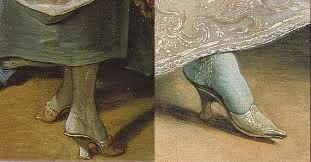 Clever shoemakers were encouraged by their patrons to device a safer shoe for ladies and hollowed out the chopine at the ball of the foot thus creating the first high heeled shoes for women. The new style gave women of small stature height as well as safely. 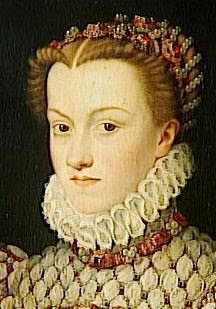 Catherine de Medici (1519-1589) is credited with being the first women to make this style fashionable and the style remained in vogue throughout her life time before becoming passé. Catherine married the King of France and took the style with her where Ironically men in the French Court began to wear high heeled shoes and continued to do so for another two centuries until after the French Revolution (1789-1799). By which time heeled shoes were a sign of affluence and a sure fire way to lose your head. Mens' style became conservative and high fashion women wore heelless pumps leaving only prostitutes wearing heeled footwear.
Posted by footalk at 5:21 PM 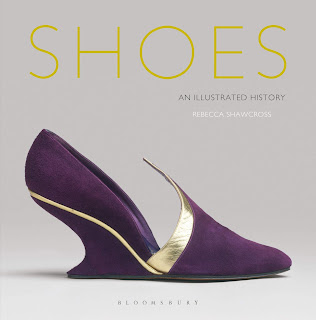