Killer Heels: The Art of the High-Heeled Shoe 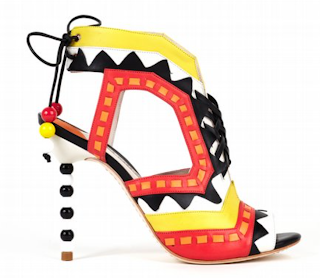 The Victoria & Albert Museum will showcase more than 200 pairs of historic and contemporary shoes in a new exhibition, "Shoes: Pleasure and Pain." On ahow are some of the most extreme, amazing, absurd, luxurious and famous historic and contemporary footwear ever made. Exhibits explore the "agonizing aspect of wearing shoes as well as the euphoria and obsession they can inspire." The work of over 70 designers including: Manolo Blahnik, Jimmy Choo, Christian Louboutin, Prada, Vivienne Westwood, Alexander McQueen, Zaha Hadid and Sophia Webster will be featured in the exhibit. The exhibits are organized across two floors and around three themes:

“Transformation” highlights shoes that are now legend, like the many interpretations of Cinderella’s slipper that through folklore and cultural influences have become “contemporary marketing tools for the concept of the modern-day, fairy-tale shoemakers, whose designs will magically transform the life of the wearer.

“Status” focuses on the correlation between impractical shoes, often designed in shapes and materials that make them unsuitable for walking and the people of privileged status who usually wore them. Then there are the outlandish and absurd modern creations there are Indian men’s shoes with extremely long toes, noisy slap-sole shoes worn in 17th century Europe and ‘Pompadour’ shoes worn by trend-setting women in the 18th-century French court.

Follow the blog, Shoes: Pleasure and Pain (V&A).
Posted by footalk at 10:54 PM No comments: