Rudolf & Söhne Scheer: Shoemakers to the crown heads of Europe

Rudolf & Söhne Scheer are the oldest bespoke shoemakers in Europe. Based in Vienna the family have been making shols for seven generations . Truely suppliers to the crownheads of Europe the business was named imperial court purveyor by the Habsburg dynasty in 1878. The original building at Bräunerstrasse 4 Vienna still houses many of the original wooden lasts handcrafted for the well heeled of Europe. On average Sheers’ shoes take six months to make and involve several fittings. Leather is chosen from a "library," with some pieces dating back to the 19th century . Today Rudolf & Söhne Scheer shoes cost upward of $US 6,700 a pair and range from classic wing tips and tall-shaft boots to peppy derbies and glossy whole-cuts.
Posted by footalk at 4:36 PM No comments:

Northampton Museum and art Gallery is actively looking to develop its shoe collection: Can you help? 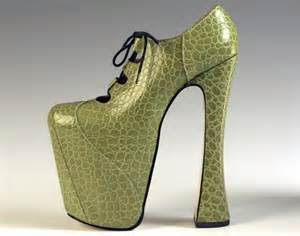 Northampton Museums and Art Gallery is actively looking to develop its shoe collections through gifts and bequests. If you would like to donate shoes or money towards a shoe purchase fund then please contact Rebecca Shawcross or Jane Seddon on 01604 838111 or email rshawcross@northampton.gov.uk or janeseddon@northampton.gov.uk.
Posted by footalk at 4:00 AM No comments:

World at Your Feet footwear conference: University of Northampton 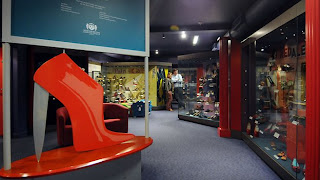 The importance of shoes in world history has not been lost on a group of global footwear experts poised to convene in Northampton. The town was chosen as host town for the conference because its museum which houses the world's largest collection of shoes. Prof Giorgio Riello (University of Warwick) will be the keynote speaker at the two-day World at Your Feet footwear conference (20th March 2013 - 21st March 2013) to be held at the University of Northampton. His speech "The Art of the Shoe: Poetry and Pornography of a less-than-pedestrian artefact" will touch on the role of the shoe as a fetish object, as art and as a symbol of excess among the wealthy. The event has been organised in association with Northampton Museum and Art Gallery and Northampton Borough Council and will target those from different academic disciplines, including fashion and design, history, sociology, anthropology and ethnography, and psychology. It is also suitable for those interested in fashion and shoes, and aims to encourage debate and discussion about the design, wearing and social significance of footwear from across the world in the past and today. Other papers to be presented at the conference include shoe manufacture in China, the subculture surrounding the shoes of designer Vivienne Westwood, the popularity of Clarks Originals in Jamaica and how World War Two shaped the development of the stiletto in the 1950s. 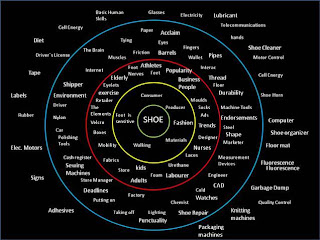 Posted by footalk at 4:57 PM No comments: 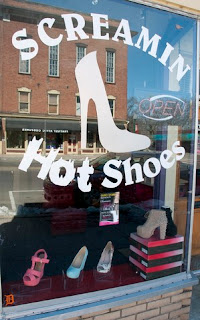 Screamin' Hot Shoes, sells women's shoes, and specializes in transgender and stripper footwear . The new foot boutique she is in Ypsilanti Michigan. Paula Filek openned the store after she recognised the problems many transgenders and cross dressers have buying suitable shoes. Among the labels in stock are Soda , Shoe Delicious, City Classified and many more. Prices from $40 to $500 and men, women and transgenders customers are always welcome.
Posted by footalk at 9:16 PM No comments:

David Bowie Exhibition at the V&A 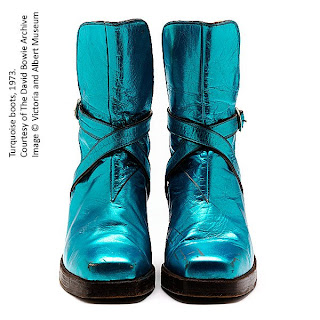 The first international retrospective exhibition of David Bowie will be held at the Victoria and Albert Museum (V&A) from 23rh March to the 11th August 2013. The exhibition explores the creative processes of Bowie as a musical innovator and cultural icon, tracing his shifting style and sustained reinvention across five decades. On show are more than 300 objects that will be brought together for the very first time. These include handwritten lyrics, original costumes, fashion, photography, film, music videos, set designs, Bowie’s own instruments and album artwork. The exhibition will explore the broad range of Bowie’s collaborations with artists and designers in the fields of fashion, sound, graphics, theatre, art and film. On display will be more than 300 objects including Ziggy Stardust bodysuits (1972) designed by Freddie Burretti, photography by Brian Duffy; album sleeve artwork by Guy Peellaert and Edward Bell; visual excerpts from films and live performances including The Man Who Fell to Earth, music videos such as Boys Keep Swinging and set designs created for the Diamond Dogs tour (1974). Alongside these will be more personal items such as never-before-seen storyboards, handwritten set lists and lyrics as well as some of Bowie’s own sketches, musical scores and diary entries, revealing the evolution of his creative ideas.

Posted by footalk at 1:03 AM No comments: 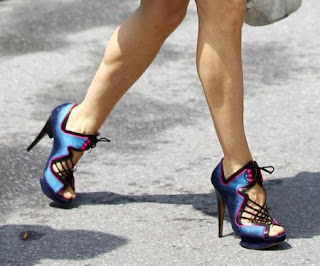 The former 'Sex and the City' star Sarah Jessica Parker has now modified her high heels wearing habits after learning she had irreparably damaged her feet with unsuitable footwear. Parker claims she would previously wear heels everyday for up to 18 hours but recently changed from designer spikes for cheaper versions whilst filming 'I Don't Know How She Does It', The actress dressed more in accord with her character and attributes her recent foot discomfort to wearing cheaper shoes.
Posted by footalk at 10:29 PM 2 comments:

Jerome C. Rousseau is inspired by Oz the great and powerful 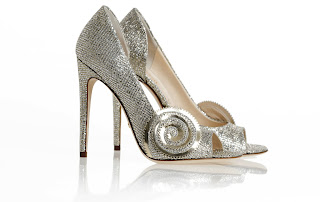 An exclusive version of the shoe will be featured on shoescribe.com starting from March 7th, 2013. Jerome’s creation is an open-toe high heel pump covered in a glittery mesh fabric combined with a gold leather spiral. To launch the project as well as celebrate shoescribe.com’s first anniversary, Jerome created a beautiful illustration of the shoe that has been printed on premium dust bags to be gifted with every purchase after launch, while supplies last. 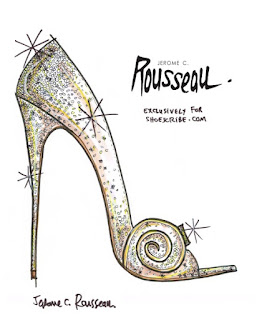 Posted by footalk at 6:04 AM No comments: