Posted by footalk at 5:32 PM No comments:

Melissa Shoes is a Brazilian footwear company who have just released 3D printed shoes that smell like bubblegum. The footwear is made from a proprietary plastic known as Melflex. Injection-molded plastic shoes are made in a similar way to the the plastic chairs designed by modernist designers like Charles and Ray Eames and Eero Saarinenin the mid 20th century.Unlike traditional footwear Melissa Shoes are conceived as pixels in a 3D rendering. When producing molded plastic goods from 3D-rendered models, it is possible to impregnate the raw material with fragrances. Instead of the neurotoxic chemical smell of PVC, Melissas smell like bubblegum. If these shoes take off Swedish designer, Naim Josefi believes in the near future consumers should be able to have their feet scanned in-store, and the shoes printed on demand. Several designers have already experiemented with the concept of 3D printed shoes. 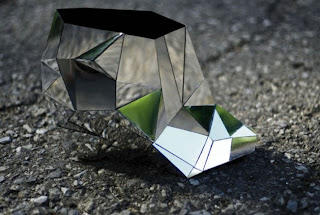 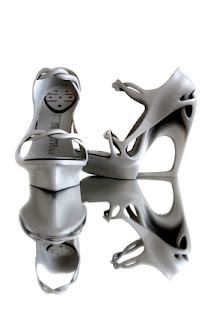 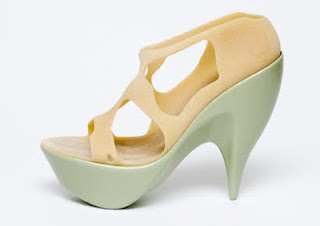 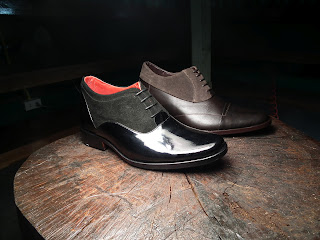 Don’s Footwear is owned and operated by Allan Donnelly, a Scotsman, based in Thailand. Through on-line marketing most of his hand crafted shoes are sold to the North Americans. Such is the marvels of the net. Don’s Footwear has an added specialty which gives extra height to the wearer. He perfected height-increasing styles which prevent height challenged gents from wearing lifts. The master craftsman makes his own lasts which accommodate sizeable sole inserts giving added inches. Allan Donnelly casts special moulds and selects insole materials that will not collapse under the weight of the wearer. Donnelly studied footwear patternmaking and last design in the Netherlands while working as a CNC machinist. He undertook an informal apprenticeship with a shoemaker for a year, and then returned to Thailand to start his own brand.

God Save My Shoes: Film Premier

God Save My Shoes will be released at the QUAD Cinema in New York on Friday March 30th. The film will play for one week only (more if successful). Tickets can be purchased in advance from MovieTicket.com or by calling (800)-777-film, or at the Quad Cinema box office at 34 West 13th Street in New York City (between 5th and 6th Avenue). For every ticket sold a contribution is made to Soles4Souls. Shoe fans from other countires can also see the movie when it premiers locally. Meantime netizens can participate in the Facebook game: How Far Would You Go to Save Your Shoes? with a chance to win tickets to the NY premiere, a $250 gift certificate from DSW, and the official T-Shirt and Poster of GSMS.
Posted by footalk at 4:46 PM No comments:

Posted by footalk at 4:32 PM No comments: 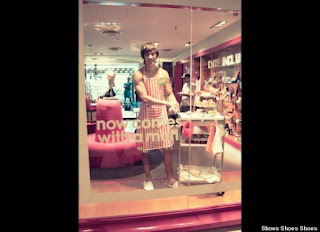 Shoes Shoes Shoes is in Kuala Lampur, Malaysia and they teamed up with a local dating service to match shoe-hungry women with sugar daddies who are willing to fund a shopping habit. More information at their shoe dating website . Women buy a pair of shoes at the boutique and leave their details with the store. A dating site matches the woman’s profile with “eligible bachelors” who have chosen the same pair of shoes. Once a suitable match is found you go on the date. The bonus is the girlsreceives a shoe discount in the form of a cash voucher, from their matched partner. All dates and bachelors must live in the Kuala Lumpur area. Men sign up on the dating site Lunch Actually and pick out 20 shoes that they would like to see a potential date wear. The guys then pledge to pay for anywhere from 10 to 100 percent of the cost of the shoe. Shoes Shoes Shoes believes their system is akin to what would happen on HBO's hit show "Sex and the City."
Posted by footalk at 9:20 PM No comments:

Madonna up for truth or dare 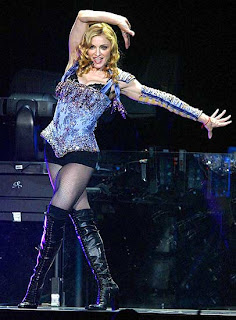 Madonna is expanding into footwear, with a series of dance-inspired styles to be launched for in the Autumn, 2012. The shoe line comes under the singer's new Truth or Dare label, and will be produced by Canada-headquartered firm Aldo Group Inc. The initial range comprises over 60 styles, including flats, heels and booties with prices are set from US$89 to $349, Madonna has had a key input on the line. Retailers supporting the footwear launch include department stores Nordstrom and Macy's, Canada's The Bay and the UK's Selfridges, as well as website Asos.com. The brand is expected to expand into European countries including France and Spain for 2013. The Truth or Dare brand is aimed at 27- to 50-year-old women, compared to the Material Girl clothing line Madonna launched in 2010 in collaboration with her teenage daughter Lourdes. Material Girl is targeted to younger consumers.
Posted by footalk at 4:10 PM No comments:

Posted by footalk at 4:44 PM No comments:

toeslayer on the history of thongs 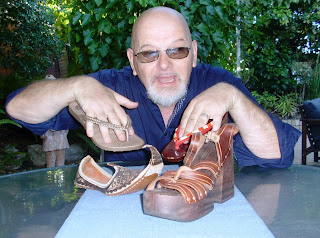 Posted by footalk at 6:30 AM No comments:

Willebaldo “Willie” Rivera and Raul Ojeda shoemakers to the stars 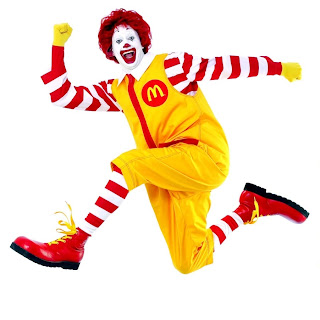 Willie’s Shoe Service on Melrose was opened in 1956 by Willebaldo “Willie” Rivera. Set across from Paramount Studios and the Western Costume Company, the shoemakers were soon busy creating handmade shoes and leather goods for the industry. Previously Willie had worked for Western Costume, the famous Hollywood wardrobe house, and his job was to make sample shoes from scratch from designer's drawings. After a wardrobe malfunctiuon which left Fred Astaire with a burst pair of shoes Willie came to the rescue and repaired them. Astaire was so impressed he insisted Rivera make his shoes from then on. Willie created the sandals worn by Charlton Heston in Cecil B. DeMille's 1956 classic film "The Ten Commandments" and the boots worn by the Starship Enterprise crew in the 1979 movie "Star Trek: The Motion Picture" as well as several pairs of bright red clown shoes for Ronald McDonald. Willie’s Shoe Service was relocated to north of Melrose Boulevard in 1982 and Raul Ojeda joined the firm in 2006. By continuing to blend the traditional art of bespoke shoemaking with the tastes and needs of modern life Willie’s Shoe Service has become a trusted supplier for custom shoe and repair needs for the Hollywood set. Cost means shoes are rarely made from scratch for the stars and to save money many are standard models modified to suit individual feet Raul Ojeda is a master of the craft and has made shoes for cast members of popular TV series "Mad Men," and "Glee." For a recent episode of the TV series "Modern Family", shoe designer, Raul Ojeda (Willie's Shoe Service ) crafted a pair of shoes covered in red sequins for actor Jesse Tyler Ferguson. His character, Mitchell, shows off the shoes for a "Wizard of Oz"-themed birthday party he throws for his partner, Cam. The one time shoe shine boy now makes shoes for celebs like Steve Carell and Sally Field. His latest project has been to make shoes for cast members of upcoming films, "The Incredible Burt Wonderstone" and "Lincoln."
Posted by footalk at 5:30 PM No comments: 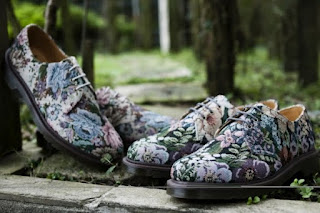 Dr. Martens has always been at the forefront of unisex style. Their new range, the Dr. Martens Needlepoint unisex shoe collection is no different and featuresprints of needlepoint tapestries. The woven fabric patterns give eye-catching appeal. Available for men and women in both the 1461 3-Eye shoe and 1460 8-Eye boot.

Posted by footalk at 3:18 PM No comments:

Posted by footalk at 2:29 PM No comments:

In My Shoes: Stores about Life, Told from the Bottom Up 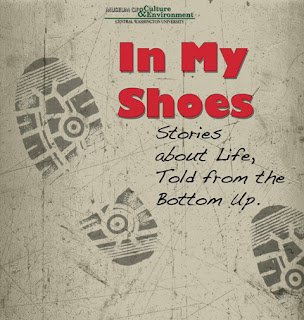 "In My Shoes: Stores about Life, Told from the Bottom Up." Is an exhibit at a Central Washington University museum tells life stories of Kittitas County residents through their footwear. In My Shoes shares the journeys, large and small, funny and poignant, of individuals from across the region. Some of the shoes in this exhibit are worn out, with creased leather and gaping holes. They have hiked through forests, climbed up mountains, and worked until they are threadbare and thin-soled. Others are pristine and cherishe, saved only for special occasions. The exhibition includes boots worn by a miner, black heels worn by a woman who escaped from Iran, tennis shoes worn by a little boy who died.