Espadrilles (or jute soled shoes) are traditional canvas topped shoes made with the soles made originally from esparto grass, then hemp and later jute. The insolating properties of the cheap casual sneakers protected the feet from cold, humidity and heat . These could be worn all year round and were made as a form of cottage industry in Catalonia and the French and Spanish Basque regions. In the 14th century each town gave their espadrilles a unique signature. This might be a wider ribbon her, a thicker sole ; or extra crisscross at the back of the ankle, these regional varieties are still recognised worn at town festivals. Whilst mainly a peasant shoe the Espadrilles enjoyed a great vogue in the glamorous 30s and 40s when artisans such as Salvator Dali were seen wearing their white canvas shoes. In 1930, a good pair of espadrilles would cost two Spanish pesetas, (approx one cent US). During the Spanish Civil War (1936 - 1939), Republican soldiers were supplied with several pairs of espadrilles because they were cheap and serviceable. The sandals were considered so important to the army, factories were nationalised in 1938. When changes in local economy saw farm labourers move form the country to the factories in the towns and cities the demand for espadrilles fell and by the end of the fifties many of the local factories closed. The surviving factories continued to use the same jute braiding machines they had always done and by the 60s the once peasant shoe was seeling well again this time to holiday makers to the Spain. When Yves Saint Laurent was asked to design a red satin pair of espadrilles with gold satin ribbons in a 2-inch wedge for a fashion show once again the shoes caught the attention of the fashionista. More designers such as Christian Dior, Armani and Louis Vuitton took interest and there was a brief renaissance during the 80s when fashionable espadrilles enjoyed a short vogue. The Castañer factory has been in operation since 1927 and now creates luxury, high-heeled espadrilles for 15 designer labels, including Lanvin, Hermès and Christian Louboutin. Currently there are 17 Castañer boutiques in Spain, France and Japan. Their best seller “the peasant,” has sold eight million pairs alone. Castañer is held as a leading example of how a family-run Spanish shoemaking business can capitalize on traditional craftsmanship to carve an international niche.
Posted by footalk at 12:42 PM 1 comment:

Now it seems both high heels and ballet flats (a slip on shoe with a small thin heel or no heel at all) are back in fashion for men. Height challenged males might revel at the prospect of the former but not perhaps at the latter. Ballet flats represent the antithesis of the four wheel drive shoes. That is shoes you could climb the Eiger with, but are more likely seen perambulating through the shopping mall. Real men prefer espadrilles and sneakers, i.e. chic and comfortable footwear. What has added interest (for me), as a shoe watcher, is both high and low styles share the limelight at the same time – a rare event in fashion. Zeitgeist (or sign of the times) necessitates we look at current events for an explanation. Alpha males appear to want to move adeptly as well as present themselves as trim and toned. Ballet flats resemble the dancing pumps or “pompes” of the 16th and 17th centuries when dancing became all the range and no self respecting crown head was without their ballroom. Then as now best finery was the order of the day and dandy noblemen wore special ballroom slippers. Emporer Napoleon's legacy to cultured Europe was dress balls and as the popularity of dancing swept through the civilized world. When new dance steps got faster women started to wear dance slippers every bit as delicate as modern ballet shoes. Men of the 18th century wore the latest fashion high boots and male dancing shoes were confined to the bedroom along with their pipe and became. They became bedroom slippers. The latest fashion phenomenon is likely to mirror the renewed interest in dancing and the immensely popular TV programs lik Strictly Dancing (ABC) and . Strictly Come Dancing (BBC).
Posted by footalk at 1:29 AM No comments: 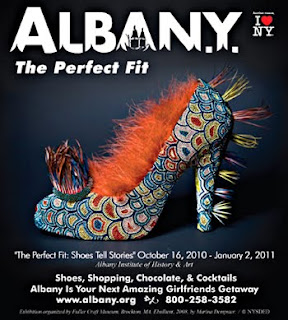 The Albany Institute of History & Art , Albuny, New York will host two new exhibitions: “The Perfect Fit: Shoes Tell Stories” and “Old Soles: Three Centuries of Shoes from the Albany Institute’s Collection.” The exhibitions open on October 16, 2010, and close on January 2, 2011. “The Perfect Fit” features more than 100 examples of fanciful footwear created by contemporary American artists between 2004 and 2008. The shoes are made of materials ranging from clay, metal, fabric, wood, glass, and paper, and transcend everyday style and function to illustrate various themes pertaining to issues of gender, history, sexuality, class, race, and culture. An illustrated catalog accompanies the exhibition and will be on sale in the Albany Institute’s Museum Shop for $10.00. Accompanying “The Perfect Fit” will be a complementary exhibition entitled “Old Soles: Three Centuries of Shoes from the Albany Institute’s Collection.” The selection includes a variety of shoes ranging from a pair of brocaded silk women’s wedding shoes from the early 18th century to modern men’s and women’s footwear from the 20th century. The collection also includes protective over-shoes, pattens, slippers, jewelled buckles, work shoes, boots, and more. The Old Soles exhibition will be located in the museum’s Lansing Gallery.
Posted by footalk at 4:46 PM No comments: