"The close relationship between a man and his shoe maker was based on the shared secret of the client's measurements. The statistics of clients were never disclosed."

Most shoes are made to a last which is a foot model with dimensions and shape similar to the anatomical foot but sufficiently different to not be exact. The last accommodates shoe manufacture and to some extent influences it’s the final fit and shoe durability.

Last
Before mass production, the original shoemaker started the shoe making process by taking a footprint outline of the sole. A block of wood (last block) was whittled or chiselled into a wooden last from the print. In the beginning a last (‘laest’, Old English meaning footprint) was made from wood but now are made in metal or plastic. These are complex structures compiled from many foot measurements. The finished lasts is not the exact size and dimensions of the anatomical foot but instead an abstract representation with specific functions. It is usually deeper in the midfoot region with a sharp 'feather edge' where the upper surface meets the sole. The last is clipped along the topline (around the ankle) and is flared over and extended in the toe region. This provides shape and applies appropriate tension when the shoe distorts to contain the loaded foot. Lasts give a working surface on which flat leather components can be given plastic form. The physical dimensions accommodate the foot during activity and the last contains contemporary fashion and styles such as toe shape. To allow the last to be removed from the shoe they are often hinged around the instep. Modern lasts are totally unlike the foot with the sole of the last, flat in order to assist in manufacture. The last is the single most important element in the shoe making process. The last is made from measurements to ensure proper size and fit of the shoe which includes tread and shoe performance. Standard measurements include girth of ball, waist, and instep for given shoe sizes relative to the type of footwear.

Anthropometry
Studies show over 90% of people have different sized feet and the individual foot has an infinite variation of morphology despite this lasts are made to match as a pair. The concept of a perfect fit is not a reality. This is further complicated by the distribution or proportions of foot mass which differ with individuals resulting in linear measurement such as length and breadth of the foot as inadequate. It is also important shoemakers consider mass and volume if an exact fit can be afforded. To ensure a best fit, measurements are taken at strategic locations and the shoemaker uses both linear as well volume measurement to construct a shoe. The modern last is made in three dimensions although it is not a direct replica of the foot. Instead it is made with production requirements, in mind. The last maker may take up to 35 measurements before the model last can be made. A shoe fitter may concentrate on length, ball width, heel, topline, arch and instep. The shoe is expected to wear well, feel well, keep its shape with wear, retain its style character, tread properly, allow for reasonable foot freedom, maintain both foot and shoe balance, remain structurally intact. These features are not always dependent on the quality of materials or components, or the manufacturing process. The design and multiple dimensions of the last provide the basis for the above.

Measurements
The majority of measurements are volume rather than the traditional length and width associated with shoe fit. 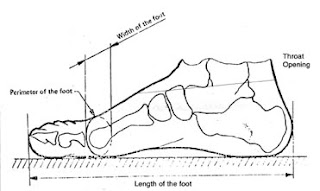 Throat opening
The distance from the vamp point to the back seam tuck.

Length
The length measurement of the foot from the back of the heel to the tip of the longest toe.

Foot Girth
There are four girth and circumference measurements taken on a last. These are the ball; waist, instep and heel (back of heel to instep). Measurement requires careful assessment of the foot, which cannot be accomplished with the same precision as linear measurements. The modern last maker uses precision instruments to determine girth but the old shoemakers used the hand span to this same effect. Aspects of the foot were measured against the shoemaker's hand; the ball of the foot was compared to the girth between the thumb and the middle finger. The instep was measured between the thumb and the little finger. This method was subject to enormous variations depending upon the size of the shoemaker's hand.

Ball girth
This is the girth measurement around the ball of the last to determine the width and volume allowance inside the shoe.

Waist girth
The girth at the waist on the last.

Instep girth
The circumference around the foot at the instep.

Heel girth
The distance around the foot from the rear base of the heel to the top of the instep.

This is the part of the last, which projects beyond the tip of the toes forming the rounded contour of the front of the shoe. A tapering recede as in sharp toed shoes increases the overall length of the shoe. In a poorly designed last the recede may encroach on the toes increasing tension on the ends of the toes. This may be referred to as tight lasting.

Heel-to-ball
This dictates the position of the hinge of the forefoot (metatarsal phalangeal joints) and the widest part of the shoe (across the metatarsal heads).

Toe Spring
This describes the elevation of the under surface of the sole at the toe to give a slight rocker effect to the shoe. The amount of toe spring (built into the last) depends on the shoe style, sole thickness and heel height. This is built into the last design and compensates for the stiffness of the footwear and provided a stress free take off into propulsion. The more rigid the soling material the greater the toe spring. Many shoes will also display a slight heel spring.

Tread
This describes the width across the sole under the ball of the last and it should correspond to the dimension of the feet. The tread point on the last represents the bottom forepart just behind the ball and in contact with the base plane.

This describes the curve or contour of the last. The swing is determined by the position of the forepart when the last is bisected longitudinally forwards from the centre of the heel arc. With inflare lasts there is an inward medial swing to the forepart and most modern shoes are made on an inflare last (banana last) because it is thought shoes are more comfortable. An outflare last describes the opposite with the swing lying to the lateral side of the forepart. Sometimes used in bespoke footwear for infants with diagnosed foot development problems. Straights last describe neither an inflare or outflare preference. The long axis of the last when drawn through the bisection of the heel curve describes two equal longitudinal halves. The normal foot has a straight axis and hence straight lasted shoes can be worn on either foot. Prior to the introduction of machinery to make heeled shoes it was common to have shoe made with a straight flare until the turn of the twentieth century. 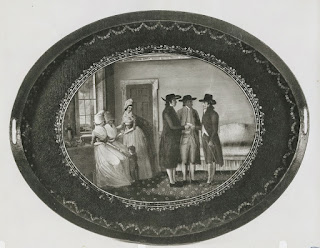